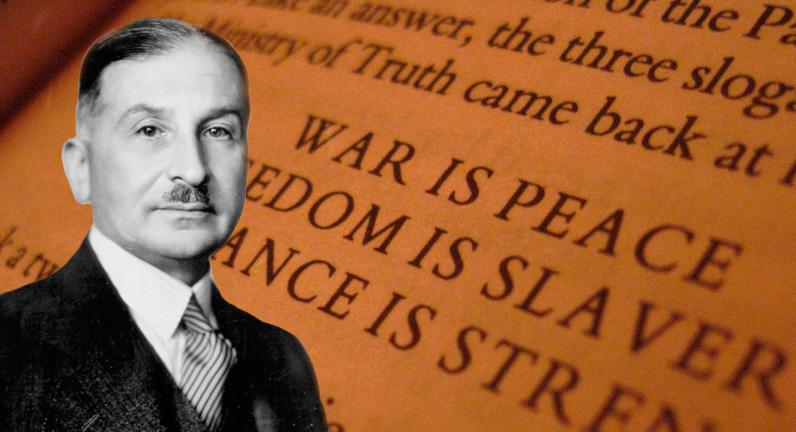 The socialists have engineered a semantic revolution in converting the meaning of terms into their opposite.

In the vocabulary of their “Newspeak,” as George Orwell called it, there is a term “the one-party principle.” Now etymologically party is derived from the noun part. The brotherless part is no longer different from its antonym, the whole; it is identical with it. A brotherless party is not a party, and the one party principle is in fact a no-party principle. It is a suppression of any kind of opposition. Freedom implies the right to choose between assent and dissent. But in Newspeak it means the duty to assent unconditionally and strict interdiction of dissent. This reversal of the traditional connotation of all words of the political terminology is not merely a peculiarity of the language of the Russian Communists and their Fascist and Nazi disciples. The social order that in abolishing private property deprives the consumers of their autonomy and independence, and thereby subjects every man to the arbitrary discretion of the central planning board, could not win the support of the masses if they were not to camouflage its main character. The socialists would have never duped the voters if they had openly told them that their ultimate end is to cast them into bondage. For exoteric use they were forced to pay lip-service to the traditional appreciation of liberty.

It was different in the esoteric discussions among the inner circles of the great conspiracy. There the initiated did not dissemble their intentions concerning liberty. Liberty was, in their opinion, certainly a good feature in the past in the frame of bourgeois society because it provided them with the opportunity to embark on their schemes. But once socialism has triumphed, there is no longer any need for free thought and autonomous action on the part of individuals. Any further change can only be a deviation from the perfect state that mankind has attained in reaching the bliss of socialism. Under such conditions, it would be simply lunacy to tolerate dissent.

Liberty, says the Bolshevist, is a bourgeois prejudice. The common man does not have any ideas of his own, he does not write books, does not hatch heresies, and does not invent new methods of production. He just wants to enjoy life. He has no use for the class interests of the intellectuals who make a living as professional dissenters and innovators.

This is certainly the most arrogant disdain of the plain citizen ever devised. There is no need to argue this point. For the question is not whether or not the common man can himself take advantage of the liberty to think, to speak, and to write books. The question is whether or not the sluggish routinist profits from the freedom granted to those who eclipse him in intelligence and will power. The common man may look with indifference and even contempt upon the dealings of better people. But he is delighted to enjoy all the benefits which the endeavors of the innovators put at his disposal. He has no comprehension of what in his eyes is merely inane hair-splitting. But as soon as these thoughts and theories are utilized by enterprising businessmen for satisfying some of his latent wishes, he hurries to acquire the new products. The common man is without doubt the main beneficiary of all the accomplishments of modern science and technology.

It is true, a man of average intellectual abilities has no chance to rise to the rank of a captain of industry. But the sovereignty that the market assigns to him in economic affairs stimulates technologists and promoters to convert to his use all the achievements of scientific research. Only people whose intellectual horizon does not extend beyond the internal organization of the factory and who do not realize what makes the businessmen run, fail to notice this fact.

The admirers of the Soviet system tell us again and again that freedom is not the supreme good. It is “not worth having,” if it implies poverty. To sacrifice it in order to attain wealth for the masses, is in their eyes fully justified. But for a few unruly individualists who cannot adjust themselves to the ways of regular fellows, all people in Russia are perfectly happy. We may leave it undecided whether this happiness was also shared by the millions of Ukrainian peasants who died from starvation, by the inmates of the forced labor camps, and by the Marxian leaders who were purged. But we cannot pass over the fact that the standard of living was incomparably higher in the free countries of the West than in the communist East. In giving away liberty as the price to be paid for the acquisition of prosperity, the Russians made a poor bargain. They now have neither the one nor the other.